According to customers’ requirement, the trunnion ball valve made by ZHEDONG COMPANY whill are provided with devices for ugent grease injection, are on both the stem and seeat for the trunnion Ball valve of DN<125mm. When the O ring of stem or the body seat ring is damage due to accident, can be prevented by between body and stem the medium leakage injection the sealing grease through the device. 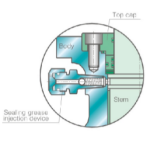 In general, ZHEDONG trunnion ball valve features the fron ball sealing design structure. Each seat of the ball valve can separately cut off the medium at both inlet and outlet of the valve to realize double-block fuctions.

When the ball valve is closed, body cavity and two of the body ends can be blocked with each other even if both the inlet and outlet are under pressure, when the medium left the body cavity might be bled through the relief valve.

Blow-out proof structure is provited with for the stem, which is positioned by the up-end cap and screw, being guaranteed not to be blown-out by the medium even if at abnormal risen pressure in the cavity.

According to some special working conditions and customers’requirement, ZHEDONG has provided the trunnion ball valve with the Bi-sealing design structure, i.e.seat sealing in front of the ball and seat sealing behind the ball. Thus the reliable sealing of the valve is ensured, because the valve can perform normally. Even if one of the effective sealing designs becomes lost due to the abnormal condition.

Regarding the seat in front of the ball, the piston effect formed by the area difference between D1 and D2, plus the pre tightness forse of a spring would cause the seat behind the ball to touch the ball closely to form the tightness, of which the sealing force will become bigger as the pressure difference gets higher.

The ball of the trunnion ball valve gets close contact with each other through the trunnion, adjusting cushion, and down end cap, the passage of static electricity thus forms together with the valve, which may lead the static electricity caused by sparksgenerated by friction between the ball and seat during on and off performance to the ground to prevent the possible rick of fire or explosion.

Self-relief in the body cavity

As the liquid medium left the body cavity gasifies due to temperature increased, the pressure in the body becomes abnormally higher, when the medium itsel in the cavity would propel the seat and self-relieves the pressure to ensure the safety of valve.

With the valve heated in fire application, the nonmetal material parts such as seat might be damaged due to high temp erature sealing ring of PTFE, O ring for the stem, and sealing gasket for body and bonnet, Lianggong’s special design of auxiliary metal to metal or the graphite seal is Provided for the trunnion ball valve to effectively prevent both internal and external leakage of the valve. As required by customers, Shuangjiang’s fire safe design for the trunnion ball valve meets the requirement of API 607, API 6Fa, BS 6755 and JB/T 6899.

ZHEDONG has provide for trunnion ball valves with Amounting pad for fixing the actuators, such as worm gear pneumatic, electric, hydraulic and pneumatic & hydraulic acturtors.

About Us
Certifications
News
FAQ